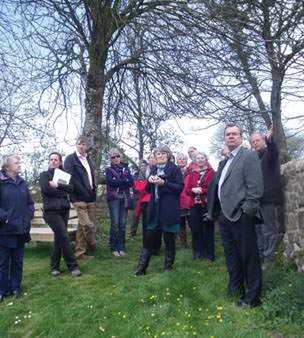 This was held on a rare sunny spring day in the National Trust owned medieval surroundings of Trerice in Cornwall. Delegates representing six counties across the south west region attended.

The keynote speaker was Sarah Chesters, Principal Education Officer at Rosemoor, the RHS garden in Devon. She described a series of activities that were available to her predominantly nursery and primary school visitors to the garden there including pond dipping, tree planting, a hands on experiment mixing water with different soil types and woodland activities whereby pupils would build a fire, boil a kettle and toast marshmallows. She soon discovered that many of the children were not used to woodland and being outside and, initially, they were not at ease with their surroundings and this is from children who live in Devon. Interestingly she stopped using work sheets a few months after she started at Rosemoor as she wanted the pupils to feel, look and listen to what was around them instead of looking downwards at a piece of paper.

After a coffee break, there were group discussions focusing on ways of fundraising to raise money for education grants, ways of working with both primary and secondary schools and rethinking ‘education’. One area of agreement was the importance of working more closely with other organisations such as National Trust, the Woodland Trust and Plant Heritage.

After lunch, the Head Gardener at Trerice led delegates in the spring sunshine on a guided tour of the grounds and described the plans to restore parts of the gardens to their former glory.